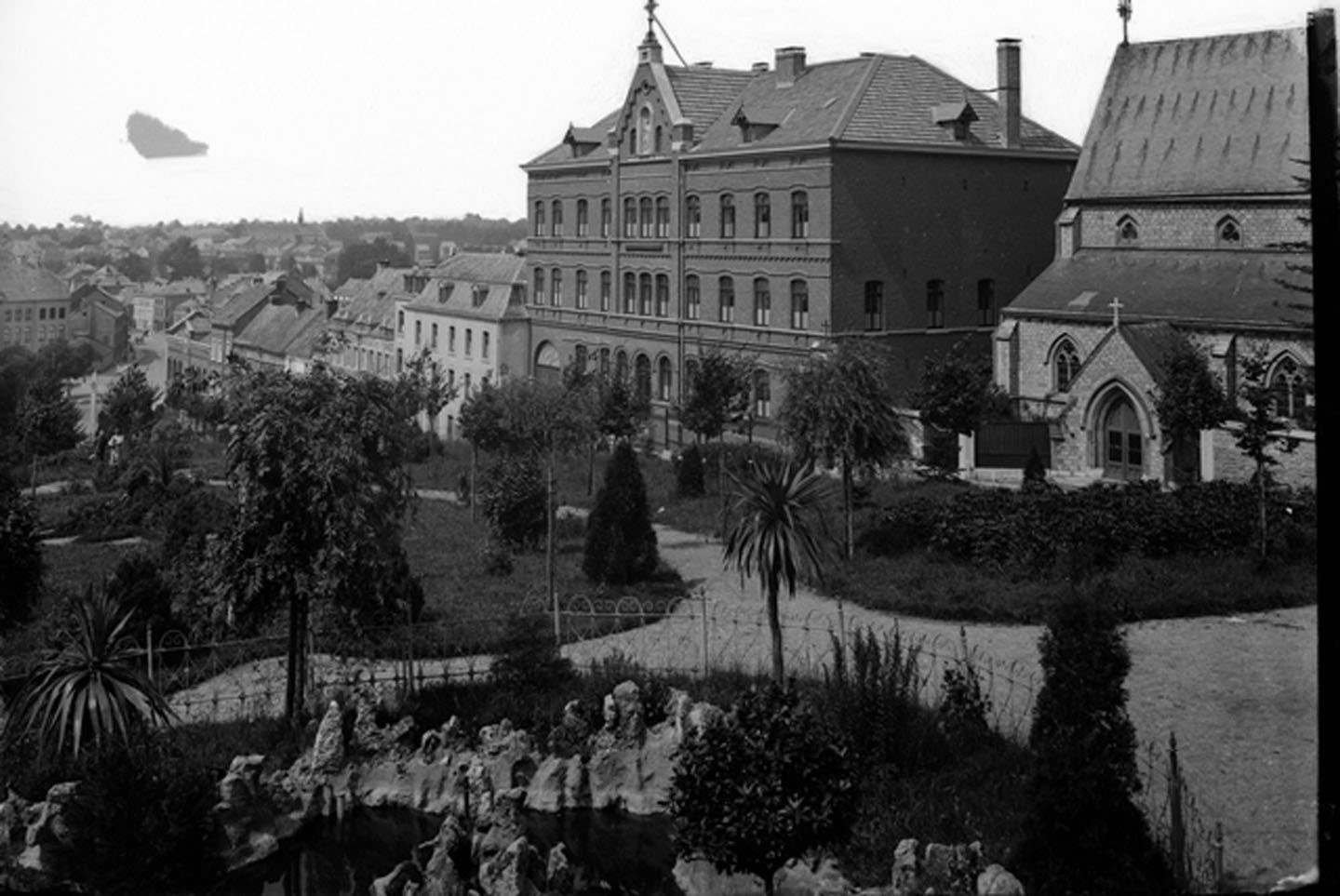 The mayor of Liège, Theodor Goer de Herve asked Charles II, King of Spain, for permission to establish a convent in Eupen for the nuns of the Order of Recollects. The king gave his permission under the condition that a public school for girls would be built as well.

The nuns bought a meadow on the Heidberg to build the church and the convent here. Friars of the Franciscan Order from Flanders started the building. Because of lacking financial means, the planned premises could only be built little by little. The cloistral annals report that each wall, each cellar vault, each channel was added bit by bit, very hesitantly. At that time, the nuns lived in great poverty; again and again, they had to sell or mortgage silver church objects to make their living. The North wing was built in 1701, the East wing in 1722 and the West wing in 1727. During this period of the convent history, the nuns only taught daughters of rich families. They taught them how to read, write, count and sew.

In the night to May 1st 1740, the nuns fell victim to a predatory attack by the so-called “buck riders”. One of the nuns could flee from the robbers, climbed up the belfry and hammered on the church bell. The gang fled, abandoning all the stolen goods they had been able to gather together until then.
In the following years, the nuns repeatedly suffered setbacks. Not much is known about the period of the French Revolution. Only that the nuns adamantly fought for the right to stay living in the convent in order to continue teaching the youth. It is only because they not only taught the children of well-faring citizens, but also in the primary school that the nuns were authorized to stay in the convent. But they had to refrain from every cloistral activity and from wearing any clothing but secular clothing.

After 18 years, the nuns were again permitted to wear their habit. The convent reported of great success as many youngsters joined the order. At that time, the convent experienced a real upswing. The boarding school was extended.

A Sunday school as well as a sewing and knitting school was opened.

First stone laying of the Gothic style Sacred Heart Church on the Heidberg as South wing, instead of the provisory chapel from 1724, which was housed in the East wing, then transformed to the sacristy.

Start of construction of the new school premises.

In April 1918, the convent was officially recognized as a public secondary school with ten classes.

Opening of the newly built kindergarten.

The city of Eupen built an additional school building.

Construction of the big gymnasium.

First stone laying of the new kindergarten, after the old one was destroyed by a storm in 1984.

Opening of the new kindergarten.

Merger between the “Heidberg Institut” and the “Collège Patronné”. Henceforth, the school was called “Pater-Damian-Schule”.

A feasibility study was ordered to transform the convent into a meeting center.

The Heidberg convent was acquired by the government of the German-speaking Community for one symbolic euro on grounds of cultural heritage preservation of this historical building.

The convent was listed as one of the community center of the German-speaking Community (service with separate management).

Fire in the convent chapel.

In May 2012, the renovations started.

In September 2014, the seminar and event center Kloster Heidberg, as we know it nowadays, opened its doors.